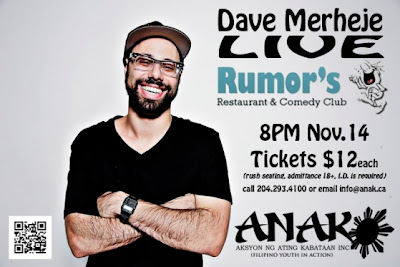 
2012 has been a memorable year for Merheje. He returns to Just For Laughs this summer where he will be taping a segment for JFL's and The Comedy Network's new joint venture, a 13-hour series airing on The Comedy Network this fall. He made his mark at Moncton's Hubcap Comedy Festival and the Ha!ifax ComedyFest this past spring and in June, completed a six-city Canadian tour with Arthur Simeon's Legends in the Making. In July, he joined the Gemini Award-winning pop culture series MTV Live as an on-air contributor. He was nominated for a 2012 Canadian Comedy Award for Best Stand-up. He became a finalist in NBC's Stand-up for Diversity search and was invited to join the 2012 Stand-up for Diversity College Touring Company performing at select colleges and universities in the US this fall.
Tickets $12each
(rush seating, admittance 18+, I.D. is required)
call 204.293.4100 or email info@anak.ca
Click here for Rumor's Restaurant Dinner Menu. Dinner guests should arrive before 6:45pm