The impact of the 1919 Winnipeg General Strike on workers’ struggles, today and future

by Johsa Manzanilla (Published in Pilipino Express May 1-15)


One hundred years ago, on May 15, 1919, in the midst of high unemployment, low wages with rising inflation and living costs, and widespread unsafe working conditions, virtually the entire labour force of Winnipeg – approximately 30,000 strong – walked off their jobs to strike. Within days, similar strikes were being held in other Canadian cities in solidarity with what was taking place here. After a month and 10 days, on June 25, 1919, the strike ended, but not after several people had died, were injured, or were deported due to participating in the strike.

The Winnipeg General Strike of 1919 was a demonstration by workers to demand better wages and improved working conditions, and to assert the principle of fair collective bargaining of contracts that actually respects the voices of workers and not just those of employers. While the immediate aftermath of the 1919 strike did not seem to produce positive outcomes for some workers, particularly those who were not allowed to return to their jobs because of striking, or others who were able to return but did not see any improvement in their working conditions, the labour movement continued to push for protections and rights of workers.

There have been victories since 1919, however, the struggle for workers’ rights continues.

Many of the rights that have been gained in our country and in our province, through the enactment of laws intended to protect and benefit participants in the Canadian labour market, do not apply to all immigrant and refugee workers. One hundred years of progress for workers’ rights have not been translated to migrant workers, temporary foreign workers, and live-in caregivers, many of whom are our mga kababayan, Filipinos. 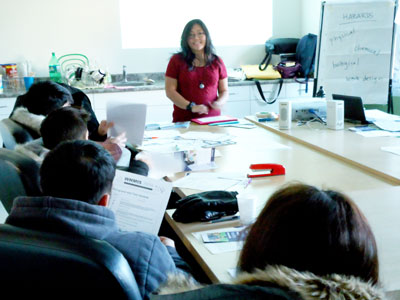 Workers who are neither permanent residents of Canada nor permanent employees of a Canadian employer have precarious job security and life safety because their immigration status is completely dependent on their employment. Many are restricted in their freedom of movement, particularly for caregivers or agricultural workers who are required to live with their employer. Many are not able to access time benefits such as overtime, and many are vulnerable to workplace hazards due to feeling unable to report safety and health issues out of fear. Because the system favours the controllers of wealth over the producers of wealth, many immigrant and refugee workers are subject to dismissal without real mechanisms to appeal. Most temporary workers are unable to organize or unionize.

Furthermore, although migrant or temporary foreign workers may likely be paying into government labour protections, such as Employment Insurance (EI), they are usually unable to use EI if they are laid off because they are only in the country provisionally. If they lose their job while in Canada, they also lose access to any remaining social government benefits they might have, such as a valid health card.

The inequalities between workers function as a barrier to keep workers divided, rather than being united together to assert their collective rights as the back-bone of the economy.

This year, on May Day, as we remember the victories won since the 1919 General Strike, we must acknowledge that the struggle continues and that there are workers among us who are still not able to even so much as access the rights and protections that many of us are privileged to now have. It is also important to recognize that workers’ rights can be repealed or rolled back if we as a society are not vigilant in advocating to the powers that be that the labour of all people must be respected and not exploited.

We must work together to improve conditions across the board, especially since not everyone experiences the same kinds of struggles. Workers who are paid with higher wages must support workers who are paid lower wages. Unionized workers must advocate for this same right for workers who are not unionized. Cis workers must make space for and ally with workers who are trans. Through collective support, including educational initiatives that aim to increase awareness and knowledge of our rights in the workplace (for example, see pictures), we can build capacity, and encourage and empower each other to be able to assert our own rights and advocate for ourselves, while also continuing to raise our voices for those unable to speak up.

We must remember that “an injury to one is an injury to all,” and “if one of us falls, we all fall.” Isang bagsak!

Johsa Manzanilla wishes all her fellow workers a happy and righteous May Day. She is a proud member of ANAK.